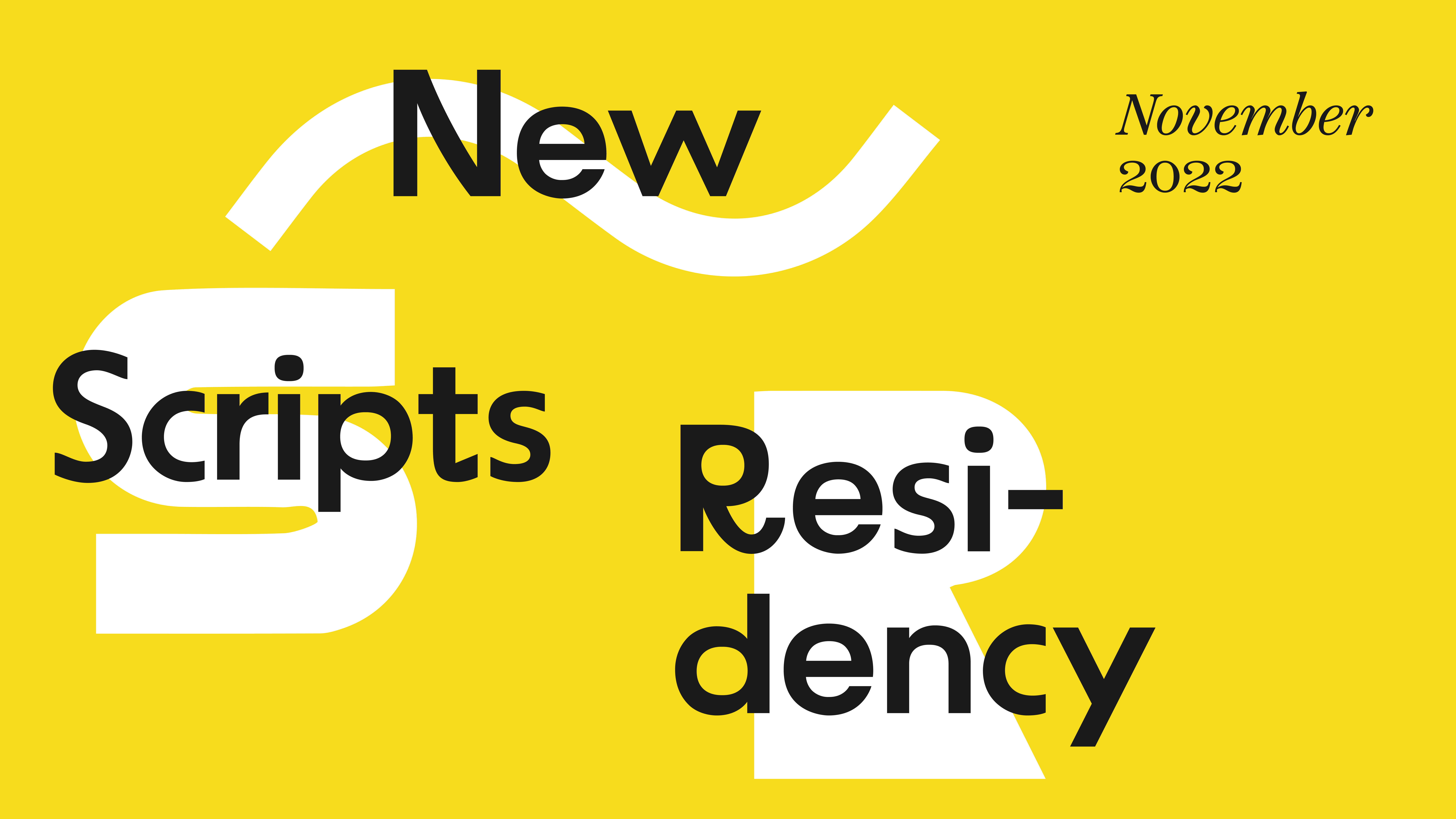 Submissions for this cycle closed on 22 Oct 2022. Please keep an eye out for our next cycle.

Every other month, the New Scripts Residency provides three scripts with considered dramaturgical support in the form of either a facilitated table read or one-on-one dramaturgy sessions with our Writer in Residence. This residency is ideal for those who have a script that they want to take forward to the next draft.

Playwrights who submitted their script(s) for this cycle are listed below.

The five eligible scripts for this cycle and the support they have received are:

4) I am not lonely by Angelina (Anj)
Receive Written Feedback

Another Time With You by Choy Chee Yew was selected to receive a table-read for this cycle of the New Scripts Residency.

Prior to the table-read, facilitator Juliet Chia, dramaturg and consultant, met with playwright Chee Yew to discuss the scope and intended outcomes for the session. Thereafter a preparatory brief and the script was provided to attendees several days ahead of the reading.

The evening commenced with an introduction to set the context and tone of the session. It was structured into four segments, with pauses for comments in between:

The readers were Christopher Gonzalez and Marwyn Ho. 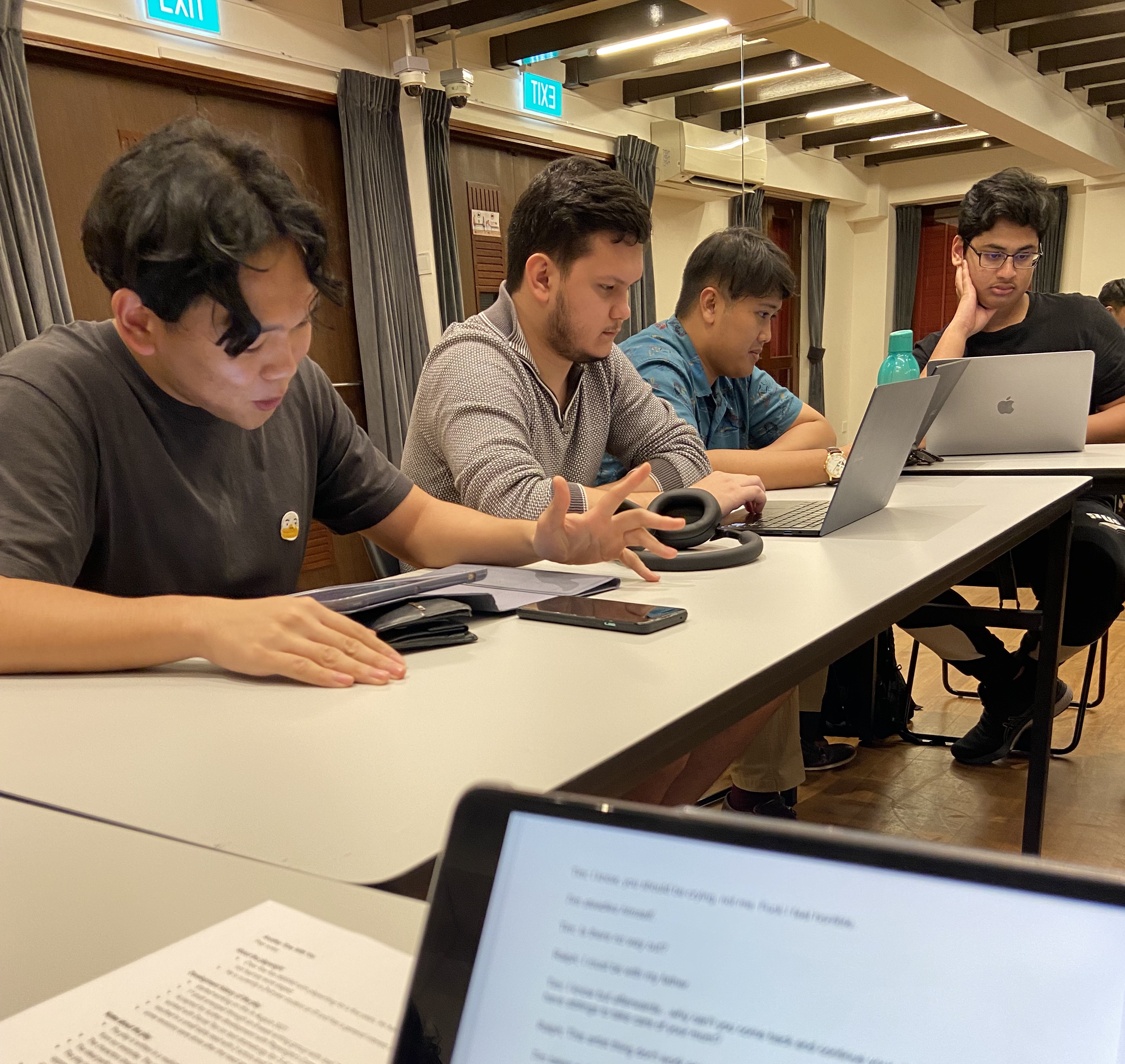 After each segment, Juliet prompted the questions or areas of concern for the set of scenes that were just read, and specific thoughts and comments were given to Chee Yew. Those who were present included LASALLE Acting Year 2 students, playwrights, directors and dramaturgs. 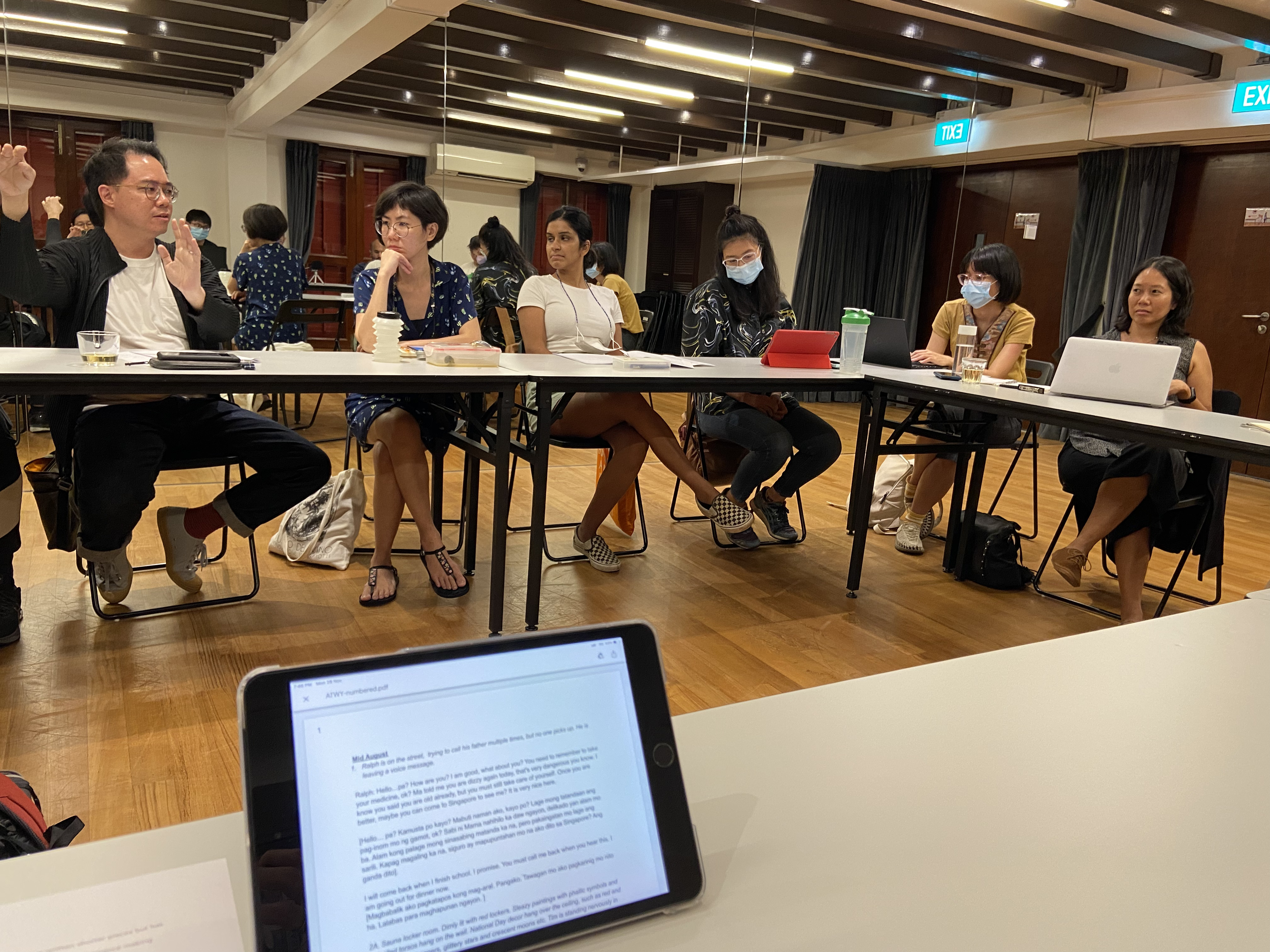 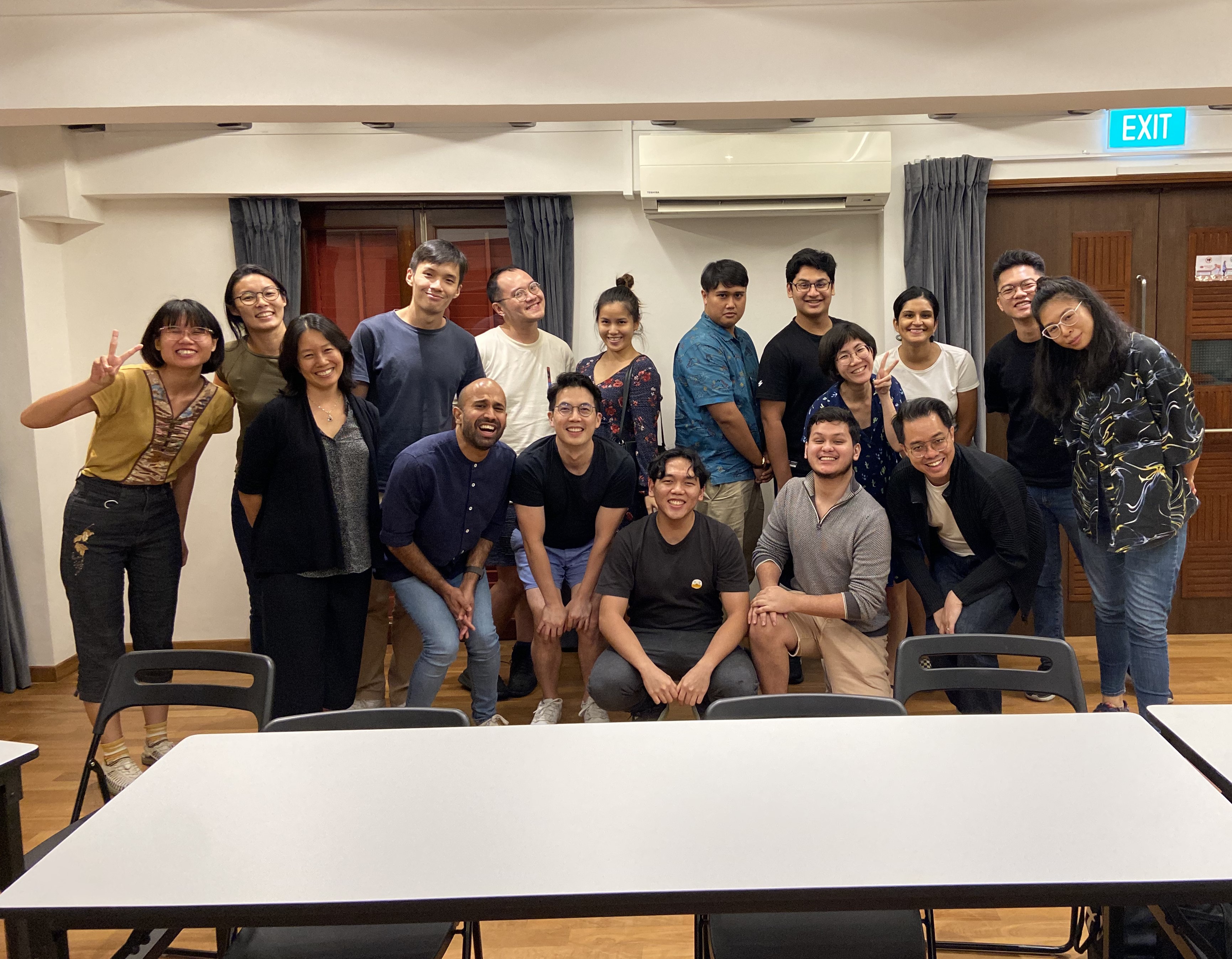 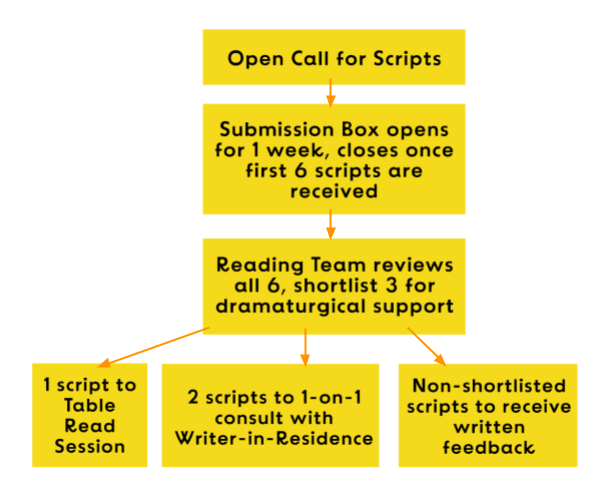 Because of our current reading capacity, we will only consider the first six eligible scripts that come into our inbox at closing time. These six scripts will be handed over to the team of readers, made up of directors, playwrights, and dramaturgs, who will consider the submissions. Based on the quality of the script, its stage of development, and the writer's needs as expressed in the application form, they will then recommend either a table read or one-on-one dramaturgy sessions with our Writer in Residence.

The table read will be organised by Centre 42, who will invite actors, writers, directors, and dramaturgs from a pool of artists we have been working closely with on this programme. The scripts receiving one-on-one dramaturgy will be scheduled directly with our Writer in Residence, who will read the scripts and provide detailed feedback in discussion with the writer. Scripts that were not shortlisted will receive written feedback from the reading team and writers are welcome to submit subsequent drafts for future iterations.

This programme prioritises writer development over polish, and aims to get the writer excited to work on the next draft of their script, with a clearer sense of where to go.

The reading and selection of scripts will be conducted by a team of dramaturgs, directors and playwrights whom have been intently involved in the development of Centre 42's New Writing Development Programmes and are actively engaged in their practices with new writing development.

The team for the November 2022 cycle comprises:

We welcome playwrights of any experience level who would like to receive considered, professional feedback on their scripts.

You will need to be a Singapore Citizen / Permanent Resident, or are currently based in Singapore.

Apply in this November 2022 cycle only if you are available on 28 November 2022, 7pm - 10pm for the Table Read session should your script be selected.

Is this a presentation opportunity? Will shortlisted scripts be staged for an audience or receive a public reading?

No. The focus is on detailed, discussion-based dramaturgical support. The table read is a closed-door event, the purpose of which is for the play to be heard and appraised in a discussion facilitated by a writer, director, or dramaturg.

How many plays can I submit? How often can I re-apply?

We only accept one play per writer each cycle.

If you had submitted multiple plays in one cycle, only the 1st submission will be considered as eligible.

If you did not make the cut-off time, you are welcome to apply again for the next cycle.

If your submission was eligible but not shortlisted for either the Table Read or 1-on-1 consultations, you are welcome to apply again with a subsequent draft.

If your play has received dramaturgical support in one cycle, we cannot support it again in subsequent cycles of the New Scripts Residency.

I have more questions!

We welcome further clarifications! Write to us at residence@centre42.sg.