Critical Ecologies: An Introduction to a Collective of Critics 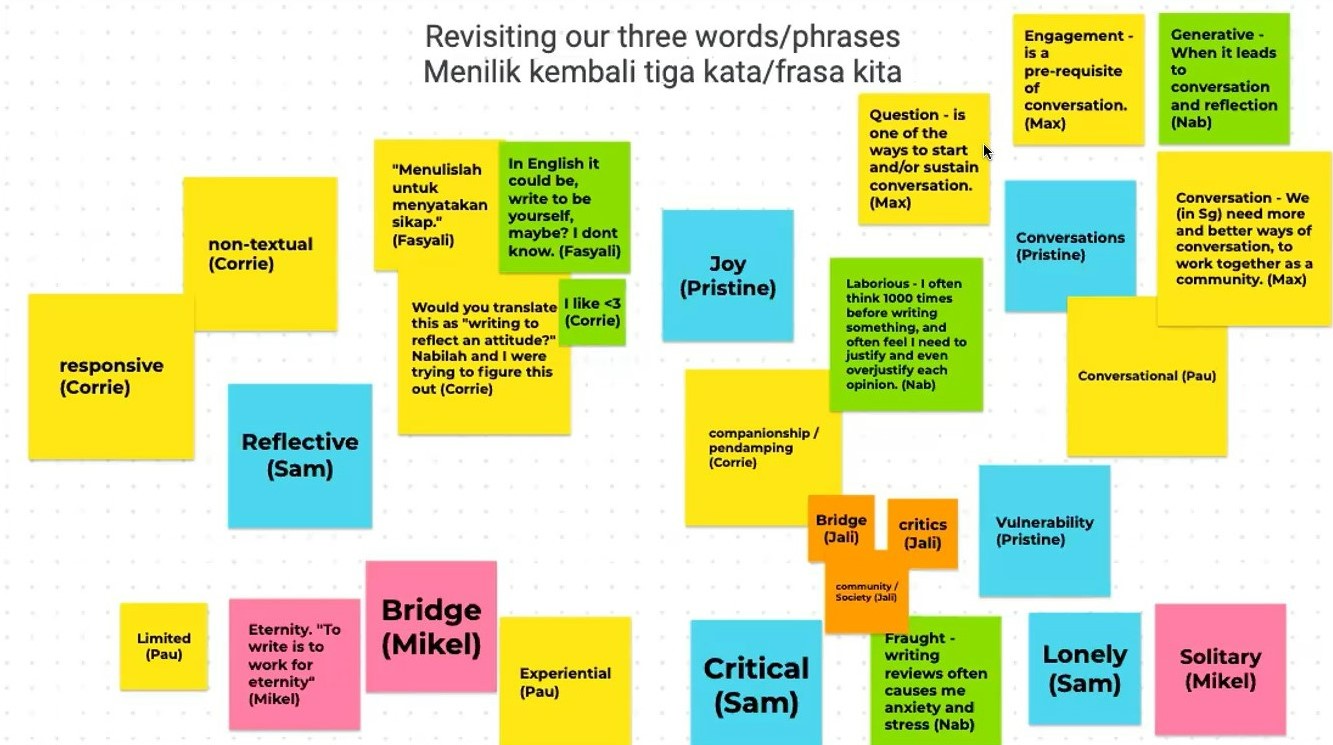 The transnational team would often notate and consolidate thoughts using tools such as Google Jamboard.

The transnational team would often notate and consolidate thoughts using tools such as Google Jamboard.

Dance dramaturg and writer Nia Agustina glances around the room behind her, saying: “It’s hard to find something here because it’s not my home!” Nia is not in her usual spot at home in the cultural hub of Yogyakarta – she’s in Lampung, a province on the southernmost tip of Sumatra, on a performance tour with choreographer and long-time collaborator Ayu Permatasari. The remaining 11 of us, packed into our Zoom room in tiny adjacent squares, wait with bated breath. Nia finally offers up a small bowl, holding it close to the screen. It is filled to the brim with empek-empek, the classic fish and tapioca comfort food from the South Sumatra region. Everyone peers closely at it, oohing and ahhing.

“I would like to share this with Fasyali,” Nia continues, “because of our shared culture with Malay culture. Because I think food is one of the ways in which we share culture. I remember when we were in Singapore [for the Asian Arts Media Roundtable], we went to a food court – I don’t remember the name, but I remember food being our way to connect.” Fasyali Fadzly, the recipient of this digital gift and a director and theatre critic based in Kuala Lumpur, beams with delight.

This was a small object exercise from the first of many weekends the Critical Ecologies Working Group would spend together over the next six months. The 12 of us have embarked on a slow, nascent, and ongoing journey of collective discovery and engagement about what it means to be an arts critic in Southeast Asia. We have done this in the wake of a global pandemic, a crisis of cultural labour and precarity, the multiple failures of local governance and public health, and often the very overwhelming isolation of successive lockdowns in the dense urban spaces in which we live. Dispersed across the Southeast Asian archipelago in the cities of Kuala Lumpur, Manila, Singapore and Yogyakarta, we wanted to figure out the ways in which our practices come together, but how they also diverge from, question and influence each other. These 12 participants are: Max Yam and Sam Kee of Arts Republic (SG), Nabilah Said (SG), Corrie Tan (SG), Fasyali Fadzly (Kuala Lumpur), Pristine de Leon (Manila), Pauline Ysabel Miranda (Manila), Nia Agustina and Ahmad Jalidu of Gelaran.id (Yogyakarta), Michael H. B. Raditya (Yogyakarta), Theodora Agni (Yogyakarta) and Philippe Pang (SG). 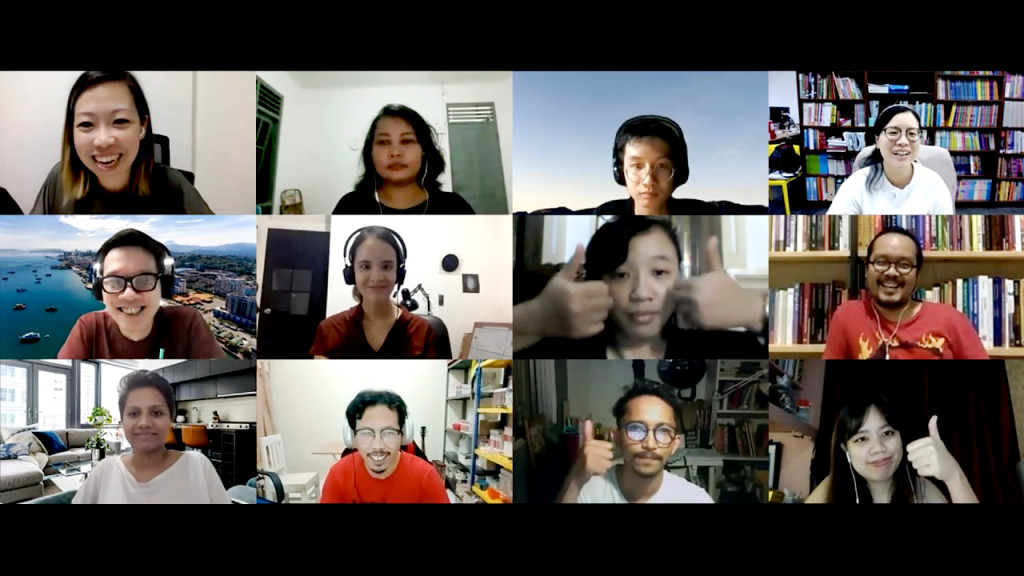 Many members of this working group are multi-hyphenates who work across various roles in the arts, including that of educator, researcher, facilitator, writer,  editor, dramaturg and administrator. They work fluidly across art forms and roles, reflecting the evolving role of the “critic” and their place in the arts ecology. There was also a collective desire to embark on work that expands what we understand as criticism, including collaborative writing processes, or facilitating discussions of performance that reorients arts criticism away from a purely textual medium. Central to the working group was also the desire to work and situate ourselves regionally, alongside peers from different communities across Southeast Asia, where we could look to each other as reference points, or for mutual affinities and solidarities. This transnational residency afforded us a digital mobility and communality that the pandemic had otherwise deprived us of.

During our six months together, from March to September 2021, we co-facilitated a series of focus group discussions and sharing sessions. Our first month was spent mapping out our relationship to the concept of “Southeast Asia”, and what we both embraced and resisted about this geopolitical and affective formation of nation-states. We took our time to get acquainted with each other, and how each of us had come to practice arts criticism, as well as the people and platforms who influenced and inspired us, which you can read about here. This spurred discussions about the modes of formal and informal training that arts critics receive, whether they’re independent critics or affiliated with mainstream newspapers. In the following months, we did deeper dives into the following topics:

While the initial six-month period of our residency has concluded, the group has decided to continue meeting up once a month in the spirit of what one might call “arisan” in Indonesia, or “kutu” in Malaysia – where each of us will take turns to offer up a topic of discussion or reflection each month and lightly facilitate each session on a rotational basis. The group hopes to build on the conversations we’ve had, and experiment with ideas and concepts that each member has introduced. Our six months together has offered us a space to pause, to be quiet, to write alongside, to witness, and to work through the griefs but also the delights we’ve lived through over the past year. As the group continues to develop and grow, we hope to open up a few of our future sessions to invited guests and members of the public as we practice ways of being together, even apart.

For now, we’d like to offer you this playlist that formed the soundtrack to our residency as we worked on collaborative digital platforms together. We each contributed several songs to this list, and we hope you enjoy listening to it as much as we enjoyed compiling it.

Critical Ecologies | Critical Anomalies
Critical Ecologies | Critical Anomalies consists of a team of 12 critics and writers, as well as documenters and translators from Singapore, the Philippines, Indonesia and Malaysia. Led by coordinator Corrie Tan, the collective is interested in mapping ecologies and vocabularies of critique in the region, and theorizing critique from regions of Southeast Asia in a collaborative way. There will be an emphasis on care ethics and care studies as applied to performance criticism, how critics are situate
10 January 2022
About UsContact UsPress Releases
Support UsNewsletterOld C42 Website
New Scripts ResidencyCo-Lab ResidencyCreation Residency
The Vault ResidencyThe Vault: Lite ResidencyArchival Residency
Productions & StagingsCollateralsPublicationsUnpublished ScriptsReviews
Essays & WritingsAudiovisual RecordingsPhotographsPeopleOrganisations