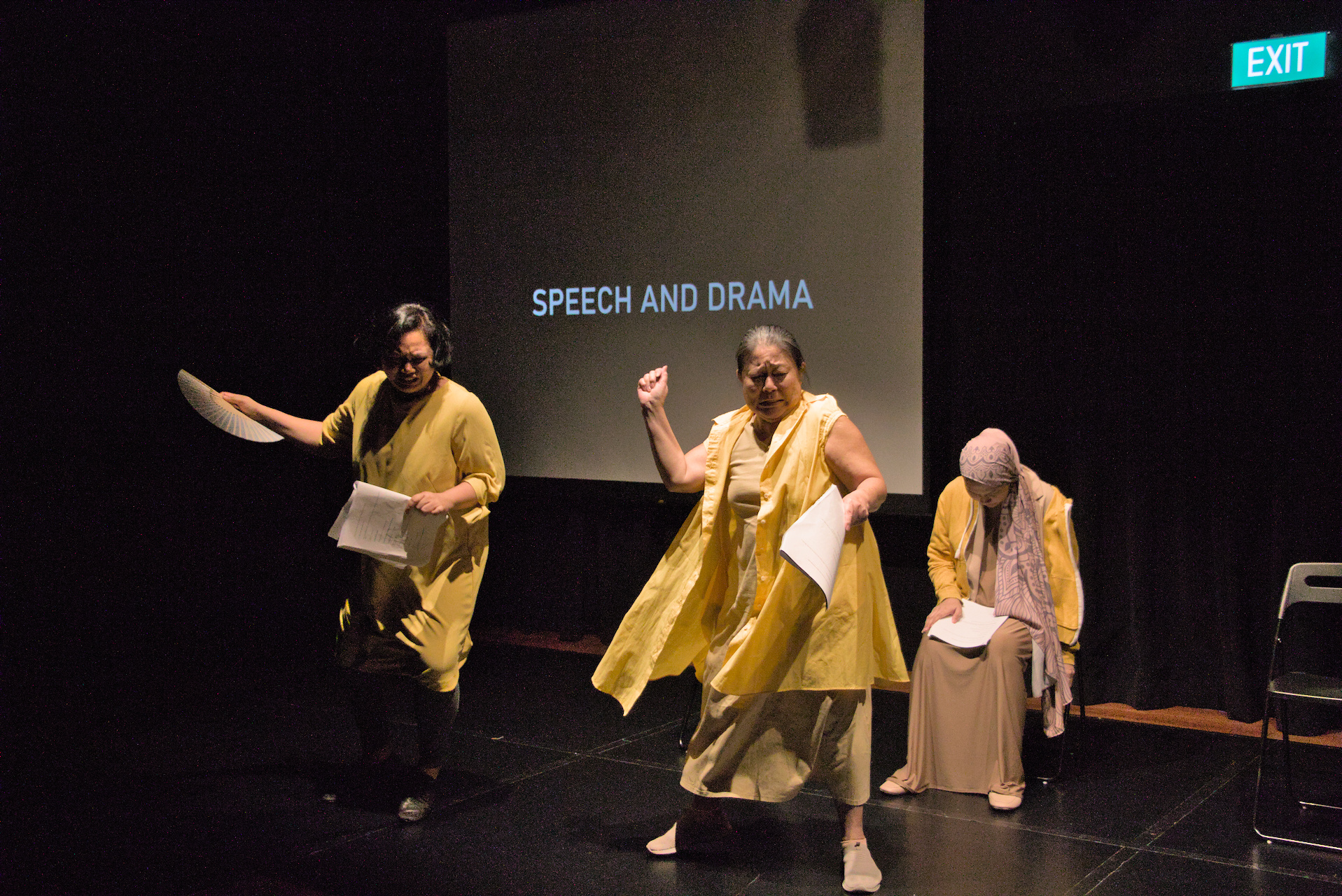 Photograph of a rehearsal of Yeast (2022)

Photograph of a rehearsal of Yeast (2022)

It’s difficult to start on an essay around female violence- mainly because I don’t want to believe it can exist. As a woman, perhaps I’ve also been nurtured to be conservative on that aspect: Women are, after all, upheld with a certain grace and ethic, especially in terms of family-making. I think highly of women, and identify as a woman writer. What would it mean for me to question the sanctity of a woman’s place?

About seven to eight years ago, I watched an interview by Barbara Walters with Mary Kay Letourneau. Letourneau was an American teacher who pleaded guilty in 1997 to two counts of felony second-degree rape of a child. The child was Vili Fualaau, who was 12 years old when sexual relations first occurred. Fualaau had been her sixth-grade student at elementary school. Letourneau became pregnant with Fualaau’s first child while awaiting sentencing.

After Letourneau completed the first two weeks of her sentence, she was caught with Fualaau by police, behaving intimately in a car. As a consequence, Letourneau returned to prison a second time for a seven year sentence. Shortly after beginning her second stint in prison, Letourneau gave birth to her and Fualaau’s second child. Upon her release from prison in 2004, Letourneau was required to have no contact with Fualaau, then aged 21. Fualaau fought to have the order removed, and the couple married in 2005. They remained married till Letourneau’s death in 2020.

When Letourneau first gave her account of the story, it was hard not to be smitten by what seemed to be a love defying all odds. She spoke submissively, her small face framed by long, flowing blonde hair. Her voice coaxed and swayed, her eyes were dewy and conveying a plea of being misunderstood. “There was no deterrent for me not to see Vili Fualaau. He was the father of my newborn, and the worst that could happen was that I would go to prison. Which I was going to, anyway.” [1]

At which point, the interviewer interjects and asks incredulously, “You didn’t mind serving seven more years?” [2]

Letourneau answers in the same, coaxing manner, only now she is slightly more confident in her stance. “I didn’t believe it was going to be that long. I thought (the sentence would be) maybe a year.”[3] Walters and Letourneau continue a conversation on how the public had indeed not gotten the accurate gist of Letourneau’s instructions from court regarding Fualaau, and the interview seems to shift to a sympathetic note of Letourneau’s truth finally being allowed.

My thoughts on the Letourneau-Fualaau case have also shifted as conversations about consent, boundary and power dynamics (also in part due to Fualaau’s position as a minority youth) continue to evolve over time. Under the previous guise of first being infatuated by a charming teacher and persistent student-suitor winning the low stakes of the court’s and public opinion against them, I’ve begun to inform and educate myself a little bit further following that first interview years ago.

In an essay by The Atlantic staff writer Conor Friedersdorf, he implores the startling reality of the understudied female predator. The article compiles statistics of sexual violence committed against men, as well as providing figures of unreported cases by female abusers. Friedersdorf concludes with evidence from a 2012 study, using data from the U. S. Census Bureau’s nationally representative National Epidemiologic Survey on Alcohol and Related Conditions, “The idea that women can be sexually manipulative, dominant, and even violent runs counter to these stereotypes. Yet studies have documented female-perpetrated acts that span a wide spectrum of sexual abuse.” [4]

Friedersdorf goes on to include the breadth of female perpetrators in other social aspects, “…female perpetration is downplayed among professionals in mental health, social work, public health, and law, with harmful results for male and female victims, in part due to these ‘stereotypical understandings of women as sexually harmless,’ even as ongoing ‘heterosexism can render lesbian and bisexual victims of female-perpetrated sexual victimization invisible to professionals.’”[5]

In adapting Smegma (2006) for Yeast (2022), I pondered on the hidden realities Elangovan illustrates in the play. While his writing is vicious, seething and lethal, I sense that some part of this violence exists due to placidity from our bystanders to the relevant perpetrators. In the original Rainbow Hotel segment, two men are talking about sexual relations with under aged teenagers abroad. The vignette ends with one of the men answering a call from his own teenage daughter, requesting a birthday gift from him.

Would Rainbow Hotel have been as jarringly alarming if we had not placed that montage of a father and daughter exchanging a casual phone call, after the crude exchange the two men just engaged in? Similarly, in Holy Smoke, a couple are chastising a male smoker seated near them at a bus stop. The segment ends with the wife asking onlookers to help her catch the smoker, who has escaped with her mobile phone. Is the passivity of these onlookers also part of a consistent violence on witnessing and choosing silence over objection?

As audience members bearing witness to what unfolds on a theatre stage, Elangovan’s use of the nonchalant bystander contributes to Friedersdorf’s findings on what it means to experience an act of violence from an unlikely figure. We too, might first encounter this violence in a deer-in-headlights trance: That just happened, and that is capable of happening. Post-mortem, being left to dissect the matter within ourselves, more sinister revelations could be uncovered.

Women perpetrators can exist— and likely fester in their crimes— in part, due to us allowing them to. There may be a whole host of reasons for this: Perhaps we choose not to believe in the extent of female atrocities. After all, life has often been echoed as a man’s world, why should the realm of violence be any different? We don’t get to hear the narrative of a woman steeped in cold blood, especially on the Singapore stage. Hence, I think we often forget that women are as capable of mindless violence as men are. The violence of a woman is not confined to simply being pushed beyond tipping point.

Yeast is currently en-route to being read live, I’m not entirely sure how it’s going to be received. There is the same nagging doubt I felt when I first took on this project, in that my case might be moot. No one is going to trust a fledgling playwright to convince an audience, particularly in scenarios where women actors might be rendered vulnerable. Still, I think back on the few rehearsal sessions we had for this residency. All the sessions were safe, boundaries were respected, and importantly our actors were protected despite portraying violent women. Yet in trying to make a stand for women to be allowed to be violent, I too, as a woman, find myself feeling afraid. At best, would I be shrugged off? At worst, would I be accused? What might this also mean for survivors of female abusers?

Upon reflection, I think it took a very thorough team to sift through this topic considerately in order for us to grant everyone on the creative team assurance, confidence and security. Given the diversity of the actors involved, the director and the Centre 42 team, everyone had their take on drawing lines between aggression and violence. There are probably more nuances and sub-categories within, should Yeast ever develop into a full staging. This would likely have to lead into more conversations for a wider scope of people who can offer other lenses into female violence.

Over the course of their marriage, Fualaau and Letourneau raised their children, while continuing to be featured in interviews. After their daughters reached adulthood, Fualaau eventually gave his account of how he perceived the events. Years of fatherhood have made Fualaau a mature, seemingly satisfied husband. He looks the part of a stoic, doting parent and spouse. The interviewer asks, “As a 35 year old man now, to look back on your 13 year old self and give him advice as a man, what would you say?” [6]

He trails off again into more confused laughter, remembering the start of a relationship no one can ever fathom succinctly, least of all himself. What other repercussions might he have to manoeuvre in the wake of his spouse’s death? While the debate of their contentious relationship continues to point to other painful truths, Fualaau will undoubtedly have to be the only one grappling to reason with choices he made.

Under the current limited scope of kinder options available to him and several others, I hope that as creators, we can offer more in terms of representation. It is a murky journey to insist on more learned ways we can respond to survivors of understudied perpetrators, but it is one we will have to undertake sooner or later.

Syal, Rajeev. (2022, June 2) "Why did the Depp-Heard libel outcomes differ in the US and the UK?" The Guardian. https://www.theguardian.com/law/2022/jun/02/johnny-depp-amber-heard-libel-outcomes-differ-us-uk

The Vault: Yeast
Content Warning: Strong language, depictions of sexual violence, racial prejudices and suicide Yeast is an all female adaptation of the 2006 play Smegma.  Smegma was written by Elangovan and was originally slated to be staged by Agni Kootthu (Theatre of Fire) in 2006. The play is a series of ten vignettes depicting imbalances of power dynamics, socio-economic paradoxes and moral dilemmas.  In Yeast, playwright Euginia Tan has edited and dissected the play to put women at the forefront of
28 July 2022
About UsContact UsPress Releases
Support UsNewsletterOld C42 Website
New Scripts ResidencyCo-Lab ResidencyCreation Residency
The Vault ResidencyThe Vault: Lite ResidencyArchival Residency
Productions & StagingsCollateralsPublicationsUnpublished ScriptsReviews
Essays & WritingsAudiovisual RecordingsPhotographsPeopleOrganisations